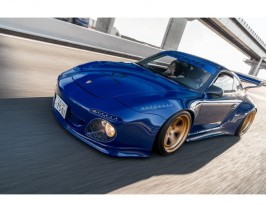 OLD&NEW has reinvented the Le Mans-winning design and seamlessly integrated bold aero kit touch-ups. It offers a body kit evocative of the Porsche 935. Based on the water-cooled Porsche 911, OLD&NEW has reimagined the Porsche 996 and 997 models to pay homage to the Porsche 935's iconic racing lines. The concept was based on the silhouette standard, with no alterations permitted to the hood, door panels, or wheel arch lines. On the other hand, all other body panel shapes and material compositions are completely customizable. For instance, the 935's unusual front slant nose, overfenders, and big rear wing were used to produce a body package unlike any other.

The kit was developed by Miura San (who also designed Rocket Bunny, Pandem, and Liberty Walk), while working for Old&New in Japan. One method he used to accomplish this was to return to the 1970's and adapt the 997's distinctive slant nose design. The magnificent styles of the past mixed with the more edgy trends of the present is where the term "Old & New" originates. By installing this kit on your Porsche 997 or 996, you will get an additional 10 cm of rear fender width and about 5 cm of front fender width. It is sufficient to fit 11.5- and 14-inch-wide wheels with the proper tire and wheel offset combination.

Since Model Year 2005, Porsche 997 has served as the internal name for the Porsche 911 sports car, manufactured and supplied by the German manufacturer Porsche. Customers began receiving all-wheel-drive Carrera 4 and Carrera 4S coupes in November 2005, followed by the Turbo and GT3 coupes, and the GT2 in 2007. Hence, there were major modifications to the interior and exterior aesthetics in the 997 compared to the 996, the most noticeable of which was the style of headlamps, the better AWD system, and other engine upgrades that resulted in better fuel consumption.